Mixed reactions have trailed the announcement by billionaire daughter and disc jockey, DJ Cuppy as a proud homeowner as she claims she has acquired a penthouse in London, UK. 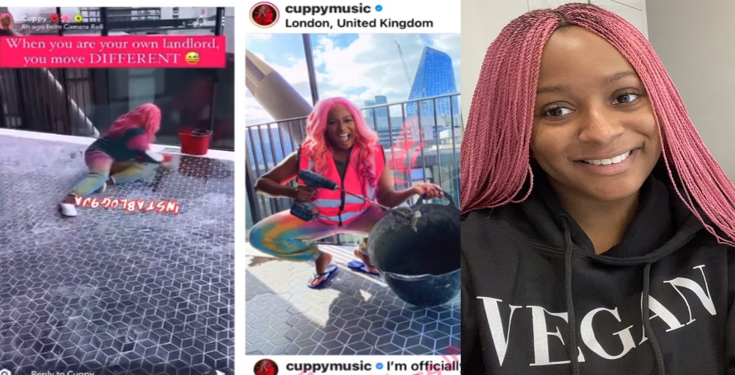 DJ Cuppy born Florence Ifeoluwa Otedola took to her Instagram story to share some videos of her mopping the floor and mixing cement meant to be used for the construction of the exotic home.

Reacting to this, some netizens attributed her achievement to her father’s wealth because she could not have acquired it with her own money.

See some reactions sampled from Instagram on Instablog9ja’s page below;

rottsam
Don’t compare yourself to her ,her father is a billionaire ,if she did not buy it her self ,the father can for her.appriciate the little you have and know that God will do yours soon.

READ ALSO:   Watch How A Company Gifted A Penthouse To A Cleaner Who Lost Her Work Due To COVID-19

ayo.j.cross
Just type congratulations and waka, except if you get money for lawyer , learn from Jerusalem oh sorry Israel

naijafunmedia
Is she really cleaning the house with the foam or her yansh?

lust4years
Where are those people always needing to diss her?! Be dissing her o. Her music is not good. Which one have u done?!

adaugou007
Congratulations Cuppy. Oya stand up and let the tiles people do their job.

enemy_of_poverty
Jiggy is my lawyer ain’t scared of her , Cuppy you don pay?

official_lordmayor1
She worked for it, not necessarily her father’s money

edgarsnazzy
Money good, she shud employ Israeldmw as a personal adviser. Na only hmm cuppy go Dey hear anytime she go ask am question. Do you think this penthouse is worth its price?
Israel. Hmm

unified_wale
Anything for the attention.. why’s she washing herself now… we all know she’ll drop it after 15secs of that video

womenpolyclub
No be say this werey father get Money like that oo , Na just the situation Nigeria de make her think say her father think say he get money . Her papa knows better