Singer Davido’s Hype-man, Edward Chukwuma Ijah, popularly known as Spesh, has given an update on the singer’s whereabouts following the death of his close aide, Obama DMW.

There have been worries and speculations about Davido’s mental health and how he was coping with the sudden demise of his close ally, Obama DMW, who died of heart failure in a Lagos hospital.

Following his death, Nigerians took to their social handles to call for prayers for the singer while stressing that his family and close associates should keep a close watch on him as he could be going through a lot as a result of Obama’s death.

DAILY POST reported that Davido had also lost some of his close ‘pals’ such as his personal bodyguard Tijani aka Tj, Tagbo; Dj Olu and Ahmed (King Jhaffi)in the past but Obama’s death seems to have broken him down as he hasn’t said a word or posted anything about it.

However, in an update via his Instagram story on Thursday, Davido’s hype-man Spesh shared a picture of him while stating that he is currently with him and he is okay.

READ ALSO:   Your Baby Is Ugly ,Strongman's Kid Is Beautiful Than Your Baby

“Baddest is with me and he is ok. They will only try but they will never break him,” he wrote. 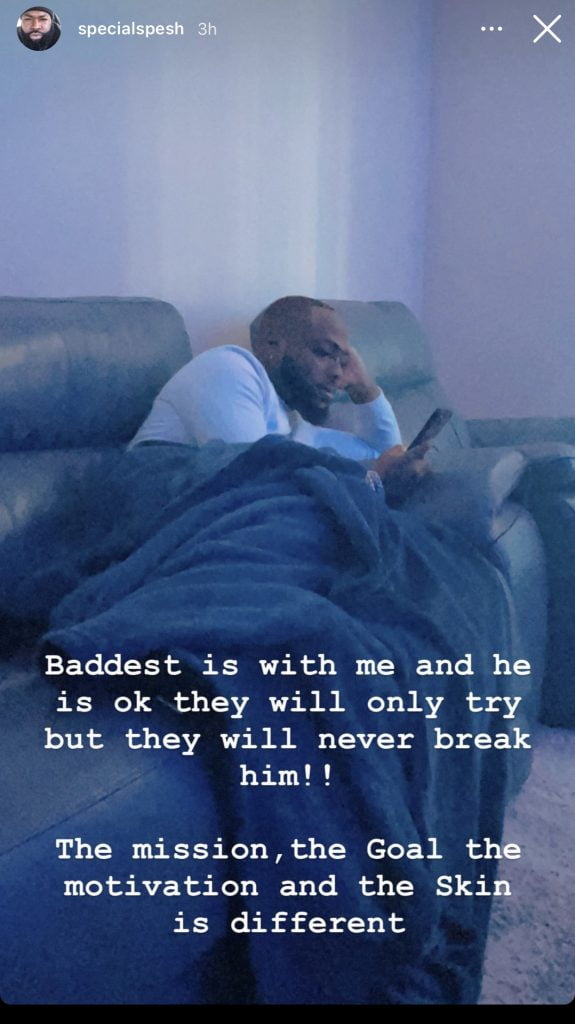 BBNaija: ‘You’re a married woman’ – Tega under attack as Saga sees her nipple