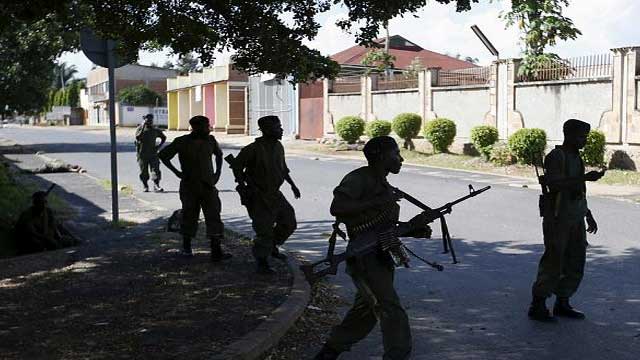 A rebel group has claimed a series of mortar attacks launched overnight on the airport of Bujumbura, Burundi’s economic capital, a day before President Evariste Ndayishimiye was due to fly out for the UN General Assembly in New York.

The attacks, which did not claim any victims or cause damage, were heard as far away as the city centre late on Saturday.

“We also had at least an hour-long exchange of fire with the military in one of the positions protecting the airport.”

An airport official, who refused to be named, told AFP he heard “shell explosions and the firing of automatic weapons” overnight.

“We were really scared but it didn’t last long,” he said.

“There is no damage, a Kenya Airways plane even landed this morning without any problem.”

A second airport source, who also would not give their name, said “at least three” mortar shells had reached the airport but caused very little damage.

A diplomatic source, who wished to remain anonymous, confirmed the attack but said it was not disrupting air traffic on Sunday.

Meanwhile, a high-level army official who also wanted to remain anonymous said none of the mortar shells reached the airport.

“It is a publicity stunt by RED-Tabara on the eve of the departure of his excellency the president to the United States, to get the whole world talking about them,” he said.

The presidency confirmed Ndayishimiye’s trip on Sunday, but did not mention the incident.

Witnesses told AFP military patrols had been strengthened in areas near the airport.

RED-Tabara, which has its rear base in South Kivu in the neighbouring Democratic Republic of Congo, emerged 10 years ago and is now the most active of Burundian rebel groups.

It is accused of being behind many deadly attacks or ambushes across the country since 2015.

In 2020, it claimed responsibility for a series of attacks in which it said more than 40 people were killed among security forces and the youth league of the ruling CNDD-FDD party.

The Burundian government and many diplomats believed at the time that this rebel group, which has between 500 and 800 men, was led by one of the fiercest opponents of the Burundian regime, Alexis Sinduhije, which he has always denied.

US Joins Forces with Abia to Fight HIV/AIDS