Senate President Ahmad Lawan, at the weekend, called on all Nigerian political leaders to come together in a bid to tackling the challenges facing the country.

The Senate President spoke, on Saturday, at a reception in Iyin-Ekiti, Ekiti State, after the paramount ruler, Oluyin of Iyin, Oba Adeola Adeniyi Ajakaiye conferred on him the chieftaincy title of Aare Akorewolu of Iyin Kingdom. 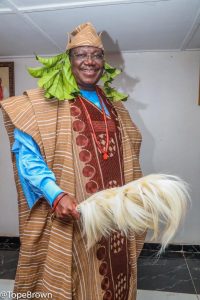 The colourful event which was well attended by Federal and state lawmakers was part of the activities to commemorate the first coronation anniversary of the Oluyin of Iyin.

“I want to say that today’s challenges are surmountable challenges. All we need is to come together as a people, face the challenges no matter how difficult they may appear.

“Once we are united, we are resolved, we can deal with these challenges, most of them if not all of them, and continue the march to making Nigeria a success, a great country, like our founding fathers envisioned.

“I belong to that optimistic school of thought that no part of Nigeria can solve a challenge that faces the entire nation.

“No matter how strong any individual can be, he needs others to make his job much easier and more successful when he has to try to deal with it.

“We are facing,  not only political but even security challenges today, in all parts of the country. What this requires is for all parts of Nigeria, particularly political leaders to come together. 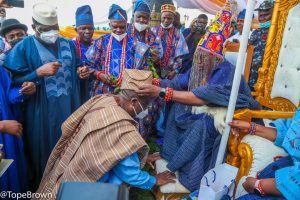 “Whether the issues are most predominant in northwest or southwest or southeast or indeed in any part of the country, all hands must be on deck and that will be the secret of our success.

“The people of Nigeria, as demonstrated by Kabiyesi, love this country, love it’s people and wherever our people come from, they feel sentimental towards each other, that they are one and the same people.

“It is for the political leaders to ensure that they work with this very important factor of unity among the ordinary people to bring all these challenges down to their knees. And we can achieve that.

The Senate President thanked the Oluyin of Iyin, his cabinet and the entire people of Iyin Kingdom for finding him worthy of the title of Aare Akorewolu of Iyin Kingdom.

Iyin is the home town of Sen. Michael Opeyemi Bamidele who is representing Ekiti Central Senatorial District at the Senate.

“On behalf of myself, my family and people of Yobe North Senatorial District that I represent and the Senate of the Federal Republic of Nigeria and indeed the entire National Assembly, I thank you most sincerely for the honour done to me. 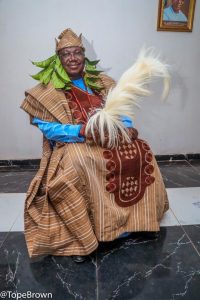 “I accept this honour on behalf of all of us in the Senate and we have a very good delegation of Senators in this very important first anniversary of the coronation of His Royal Highness.

“Your Royal Highness, you have done what we need to do in this country. The founding fathers of this country recognised and set a vision for the country.

“They came from different ethnic background, different religious persuasions and yet they had vision that Nigeria, with all the diversities, can be made into a great country, to be the greatest in Africa and occupy enviable position in the international polity and they worked hard to achieve that.

“They faced challenges, squarely faced the challenges and dealt with most of them.

“Today, our Nigeria faces some challenges but like the previous leaders, we are determined to remain united, face the challenges squarely and deal with them.

“This is something that we have been able to do in the Senate. We are from different background of ethnicity and religion. Infact, different political parties but we have decided to come together regardless of our differences and work for the betterment of our country.

“I’m proud to say that the ninth Senate and indeed the National Assembly has achieved so much. Achieving first in so many ways, facing the most difficult legislative issues that previously defied any success and the secret is: we face the challenges in a very united version.

“I believe that what Kabiyesi did is to recognise someone from Yobe State. An Ahmed from Yobe who is coming to Iyin for the first time but has been with Iyin in his life, in his dreams, in his mind, since I met my friend, my brother, my colleague, Distinguished Senator Michael Opeyemi Bamidele, your son. 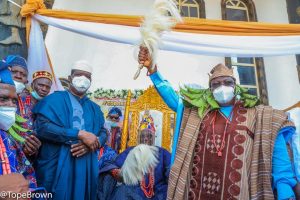 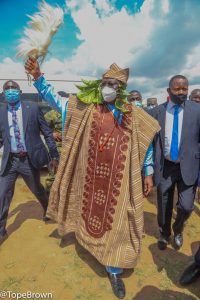 Let me say the people of this Senatorial District, you have a worthy son and particularly Iyin, your son, Senator Michael Opeyemi Bamidele, sometimes I refer to him as a one man mob of excellence, of integrity, professionalism, of trust and propriety.

“This is someone that I met when he was in the House of Representatives. But we were never close until when we met in the Senate. Every Senator today will tell you, when you mention Senator Michael Opeyemi Bamidele, he will tell you he is trust worthy,” Lawan said.