Tammy Abraham’s England call-up could prove to be a sorry blow for Arsenal’s recruitment system after they turned down a move for the wantaway striker during the transfer window.

The Gunners were reportedly in pursuit of Abraham during the summer as they looked to add a new dimension to their strike force, however, they opted against pushing through with a move for the forward and missed out on the former Chelsea man as he completed his move to the Italian capital.

After a disappointing start to the season, Arsenal enjoyed a good September where they went unbeaten, beat their nearest rivals Spurs and saw a Manager of the Month nomination for Mikel Arteta.

But there is a slight problem, albeit growing, their 3-1 win over Nuno Espirito Santo’s side is the most in a game they’ve scored this season, the lowest after that being two 1-0 wins over Norwich and Burnley.

A point can be made that these are hard-fought wins and rightly so, they helped and contributed to an upturn in fortunes.

But then the question begs, how important is a goalscorer to this side?

Abraham’s future was unclear after he was frozen out of Thomas Tuchel’s plans and was left out of their Champions League-winning squad before they met Inter Milan’s valuation for Lukaku and even scored against Arsenal during pre-season, fuelling talks to sign him.

In his final season, he scored six goals in 22 Premier League appearances but failed to meet the heights he reached under Frank Lampard in his first season at Chelsea where he netted 15 in 34 matches.

However, he didn’t stay at Stamford Bridge nor did he move across the capital. Jose Mourinho’s Roma came in for the Englishman looking to fill their attacking void as the Portuguese tactician looked to restore the Rome giants.

So far in the early stages of his career in Serie A, he has scored and provided twice in seven matches as they push for the European places.

His recent form in the Italian capital has warranted a call-up to Gareth Southgate’s side for the first time since November 2020.

Arsenal have been lacking a striker for a number of years and relying on Gabriel Martinelli to lead the line often leaves the youngster isolated, similar to Pierre-Emerick Aubameyang and Alexandre Lacazette.

The Gabon international is beginning to adapt his game to allow him to be a focal point for Mikel Arteta and use his stature to offer avenues of play rather than the one-dimensional route.

With Abraham, his game is already based on what Aubameyang is being moulded into. We saw recently that the 32-year-old won the most headers in the win over Spurs than he did in his entire career to date, but the 24-year-old has the capabilities to hold the ball up and works well in the system Mikel Arteta is slowly establishing.

Although he is still in the infancy of his career, he has a complete forward-type aura about him. What we previously saw at Chelsea is that he can act as an imposing figure, hold the ball up, lead from the front in dispossessing the opposition and as you’d want in a striker, has an eye for goal.

It has to be considered that the Arsenal target is one that got away as their goalscoring difficulties continue and the 24-year-old enjoys his start to life in the eternal city.

They were also in the mix to sign Everton forward Dominic Calvert-Lewin, but that too was speculation that fell by the wayside. However, recent reports suggest that they still have him on their shortlist.

He found his feet under the stewardship of Carlo Ancelotti and Duncan Ferguson enjoying his best season at Goodison Park warranting interest from north London.

Arsenal were reportedly looking to make an addition in the forward department as Alexandre Lacazette’s future rumbled on. Although no formal bid was made.

The powerful 24-year-old striker was a constant threat for the Toffees during, what proved to be, Ancelotti’s final season on Merseyside as he was continuously the focal point and posing countless threats aerially.

Under the guise of Ferguson, he emulated aspects of the Scotsman’s ruthless vigour and netted 16 goals in the Premier League with his form warranting a call-up to the Euro 2020 squad where he made just two appearances from the bench.

“That would be a great signing. You want to be attracting those kind of players. Whether it happens, we will wait and see. With his proven goal-scoring record, why not?” David Seaman claimed.

After a promising start to Benitez’s tenure, he scored three in as many games but a thigh injury has forced him to miss the whole of September.

The price of Calvert-Lewin would’ve undoubtedly been the stumbling block with Everton touting in excess of £50m for him but for Abraham it has to be considered an opportunity missed after Mourinho snapped him up for £34m as Arsenal tot up the list for new strikers to target.

Make sure you have subscribed to The Arsenal Way! The Fan Brands team along with plenty of your football.london favourites will be producing daily Arsenal content for you to enjoy including match reactions, podcasts, football fun and interviews. 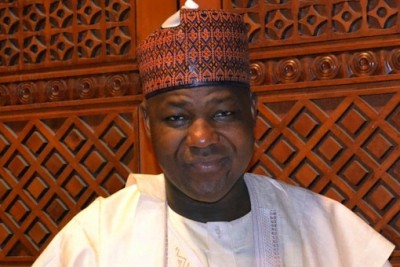 What Nigeria must do to end security challenges – Dogara |...