Following the outage that hit Facebook, Instagram, Messenger and WhatsApp for over six hours on Monday, there is a report circulating on social media that there is going to be another shutdown seven days.

A screenshot with the profile photo of Zuckerberg on his Facebook page shows he allegedly made the statement. 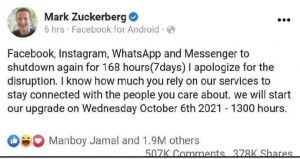 The statement reads, “Facebook, Instagram, WhatsApp Messenger to shut down again for 168 hours (7days). I apologise for the disruption. I know how much you rely on our services to stay connected with the people you care about. We will start our upgrade on Wednesday, October 6th, 2021 -1300hrs.”

A fact check by The Nigerian Xpress shows that the statement is false and misleading,

A search on Mark Zuckerberg’s page on Facebook did not show where he said there is another shutdown planned. The last post by Zuckerberg was on Monday when he announced the outage and when he said service has been restored to the platforms.

Also, a Google reverse image search did not yield any result indicating that Zuckerberg made the announcement.

A Google search also reveals that no credible media outfit reported the story except one with the domain name www.rnn.ng. The website said people are outraged over the purported planned shutdown.

The report is false and misleading.