The Liverpool under-18s scored four times in the second half as they surged to a huge win over Burnley, with a 5-0 victory coming ahead of their FA Youth Cup tie.

Though doubts are rising over the football calendar as cases rise in the UK, the young Reds were still in action on Saturday as they made the trip to Lancashire.

Their visit brought the first of two consecutive clashes with Burnley, as the two sides prepare to meet in the fourth round of the FA Youth Cup on January 7 – this away game, then, being Liverpool’s last of 2021.

An attritional clash played out for much of the first half, with Keelan Williams, brother of Reds full-back Neco, part of a Burnley defence that held strong.

Their efforts were undone before half-time, though, as the in-form Isaac Mabaya drove forward from right-back to open the scoring and cap an impressive display.

It was another slow start in the second half, with it taking another 22 minutes until Clark – who had already struck the bar before the break – fired in from outside the box to double the lead.

Then Melkamu Frauendorf struck a quickfire brace to make it 4-0, with Burnley goalkeeper Charlie Casper believing he had clawed the first of two goals in three minutes off the line only to be overruled by the referee.

READ ALSO:   Thiago's return date confirmed - but Origi to be out longer than expected - Liverpool FC 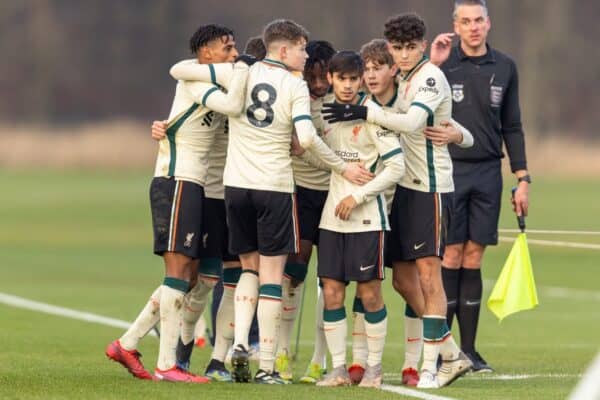 Oakley Cannonier put the icing on the cake in the third minute of stoppage time, the striker continuing an unstoppable season in front of goal to seal a five-goal victory.

Bridge-Wilkinson’s side can now enjoy a well-earned break over the festive period, before attentions turn back to Burnley and a place in the fifth round in the New Year.