There is mounting concern over the resurgence of beggars at major roundabouts and strategic locations in Lagos State despite the government’s pledge to evacuate them.

The beggars made up of different age groups are seen in  these various strategic locations, begging for alms unmolested, despite the state government’s promise last year to evacuate them off the roads across the metropolis

Commissioner for Youth and Social Development, Olusegun Dawodu, had during a press conference, which had the Commissioner for Information and Strategy, Gbenga Omotoso, and the then Commissioner of Police, Hakeem Odumosu, in attendance, in Alausa, expressed the government’s determination to eradicate street begging and all forms of nuisances off the state.

Dawodu, who said the state had set up a special task squad to curtail the menace, stressed that beggars on Lagos streets and roads constituted a considerable nuisance to law-abiding citizens, who are entitled to go about their businesses without any fear or hindrance. 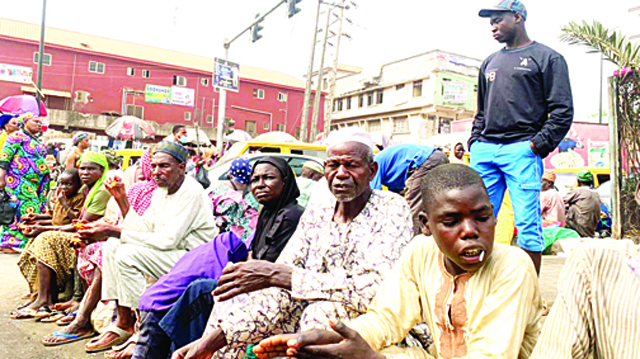 Colony of beggars at Ikorodu<br />

He said: “These groups of people have turned alms begging and hawking into a huge business by collecting returns from beggars and hawkers.

“These people sleep under the bridges, motor parks, uncompleted or abandoned buildings and other places not conducive for human habitation.”

Dawodu stressed that the measure had become necessary to rid Lagos of all forms of environmental degradation, nuisances and risks associated with their activities and curb the menace of street gegging. 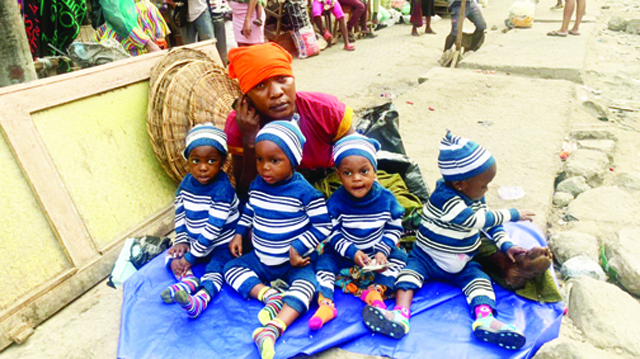 A woman begging with children in Oshodi PHOTOS: ENIOLA DANIEL

However, five months later, the state seemed to have been overwhelmed by the increasing number of beggars and homeless persons who flock to Lagos in their numbers due to high commercial activities.

At Ketu Bus Stop, for instance, the beggars assemble and settle comfortably on the median right from Mile 12 end of the Ketu-Mile 12-Ikorodu Road to Ojota.

Sometimes, when they notice that the vehicles of the Lagos State Task Force are approaching, they quickly run inside the market to hide at a particular spot in Mile 12 Market on the Alapere side of the road.

It is gathered that there is a particular place the beggars stay either close to the market or inside the market.

A trader, who gave her name simply as Monsurat, said some of them live inside the market, as there are many people from their parts of the country who regularly come to do business in the place and once they speak the same language, they are offered protection.

Similarly, beggars in Ikorodu seem to be  so organised with their tentacles spreading  to Shagamu, Abeokuta, and even to Ibadan

While some beggars are nursing mothers, others have adolescent children whom they usually force to run after passersby to solicit alms.

Frequently, the younger ones among them meander between vehicles whenever there is a traffic jam, knocking on car windscreens or stretching their hands inside commercial vehicles to beg for money.

Aside from the nuisance they constitute to passersby, as many find the touching and pulling irritating, the beggars are also compounding the task of sweepers, working for the Lagos Waste Management Authority (LAWMA).

Some of them bathe their babies and urinate on the spots they occupy. They also defecate within the area.

The waste they generate is quite huge, as they equally throw papers, wraps, and containers they used for food carelessly on the ground around them.

An Ikorodu resident, Sikiru Ahmed, said some of them, after some time here (Ikorodu) shift to Shagamu or to Abeokuta or Ibadan, operate there for some time and return to base.

“As early as 5:00 a.m., the beggars, alongside their children, are already gathered at their “business centres” to beg for alms from commuters rushing to their various destinations of work,” he said.

In some areas where they operate, the beggars have appropriated the spot they usually occupy as their own, and they will not allow any other person to make use of the place.

Lagosians are also worried over what is happening in Alaba Rago, Lagos State University (LASU/Iyana Iba axis, located on the Mile 2-Badagry Expressway, as well as Lekki Expressway by Jakande Junction.

According to them, the beggars, mostly women, and children have big-time sponsors who bring them in an open-four wheel vehicle, at about 5:00 a.m., before driving off to go and prepare food for them.

“Later, around mid-day, the same sponsors would return, park their vehicles somewhere and news would soon go round that it is time for breakfast or lunch and you would see the beggars rushing to go and collect their rations”.

It is the same story at the Berger area of Ojodu, where some beggars are plying their trade without any hindrance.

The Agege area is worse. Before the construction of the new railway line, the town was perhaps the headquarters of beggars. But since the railing was completed, the beggars have dispersed into other strategic places.

It has been revealed that there are some undeveloped properties in Magodo, Omole Phase 2, Ikeja GRA, and even Lekki, Obalende, Kara along Lagos Ibadan Expressway, and other highbrow places, where some of the beggars allegedly retire on daily basis.

Also, the Nigerian Railway Compound in Ebute Metta is one of the biggest habitation centres for these destitute.

A beggar at the Cele bus stop along  Oshodi-Apapa Expressway, Garba Shehu, who said he came from Kebbi State, said although he heard of the ban of street begging in Lagos, he could not afford not to beg, because he is still looking for money to start a small scale business to enable him to take care of his family.

Another beggar, Yusuff Hassan who says he is from Kano State, who spoke through an interpreter said he lived in Mushin with his two wives and needed money to take care of them.

Similarly, Nkechi Nwosu, a visually-impaired woman, who also begs at Cele bus stop, said she resorted to begging for survival after she was abandoned by her husband when she lost her sight.

The Public Relations Officer for the ministry, Mrs. Adeola Olabisi, expressed frustration regarding beggars on the streets of Lagos despite the efforts of the government.

She said:  “We have been evacuating the beggars, but they keep coming back to Lagos and there is no way we can stop them.  Once you pick one set another will come.

“We do pick them day and night, and where we keep them is saturated. We have started a campaign against giving beggars alms on the road, because of the overwhelming clusters they form on our roads.”

Also, the spokesperson for Lagos State Environmental Sanitation Environmental and Special Offences (Enforcement) Unit (Task Force), Gbadeyan Abdulraheem said the job of the agency is to assist and give security backup to other agencies of government to implement their functions.