Liverpool held the Premier League 2 champions-elect Man City to a 0-0 draw at the Etihad on Sunday night, as goalkeeper Oscar Kelly debuted with a clean sheet.

While the first team were setting up a second meeting with Man City in a week as they progress to the semi-finals of the FA Cup, their under-23s were in action at the Etihad.

Injuries to Harvey Davies and Fabian Mrozek, along with Marcelo Pitaluga travelling with the senior squad to Nottingham Forest, led to a weekend of debuts between the sticks.

On Saturday, Luke Hewitson made his under-18s bow in their 1-1 draw with Derby, before warming the bench for 19-year-old Kelly, who made his long-awaited U23s debut against the league leaders.

Kelly has been with Liverpool since under-9s level, but has consistently found himself behind high-profile starters in the battle for the No. 1 shirt.

READ ALSO:   Thomas Tuchel tells Callum Hudson-Odoi exactly what he must do at Chelsea to realise potential

A clean sheet at the Etihad, however, will no doubt increase his admirers in the academy setup – along with his confidence, after a number of seasons as a training goalkeeper.

The trip to Manchester saw a return to the starting lineup for James Balagizi, while both Conor Bradley and Tyler Morton were given starts as Owen Beck, another on the fringes of the first team, was called up to Jurgen Klopp‘s bench.

It was a close contest between the two modern rivals, with Max Woltman going closest for Liverpool in the first half with a goal ruled out for a tight offside, while Kelly was called into action to make a number of fine saves.

The best chance of the game fell to Reds substitute Dominic Corness, who was unable to hit the target from close range in stoppage time, leaving the two sides to share the points. 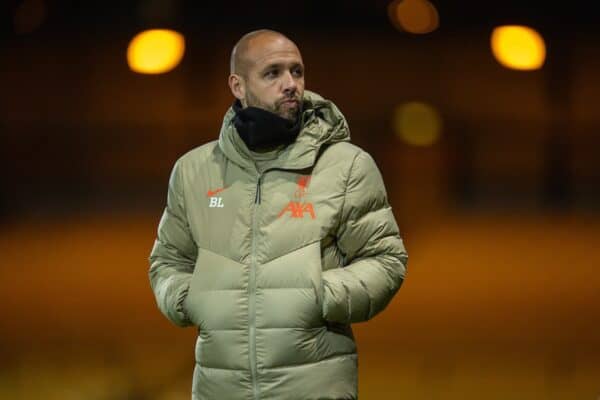 Speaking after the game, U23s manager Barry Lewtas praised his stand-in stopper, telling the club’s official website: “Oscar was fantastic for us on his debut.

“[He] made a couple of good saves. He did unbelievably well, his distribution was excellent and he made good decisions.”

The result does little to impact the Premier League 2 table, though Liverpool are still in with a chance of finishing among the top four as they face Chelsea, Leicester and Man United in the final three games of the league campaign.

Barcelona: Barcelona put on a show in the Gamper Trophy against Pumas