Liverpool defender Virgil van Dijk intends to enjoy the next month which will define whether an unprecedented quadruple is possible and has urged his team-mates to do the same.

A 1-0 victory over Nottingham Forest set up an FA Cup semi-final against Manchester City at Wembley six days after the title chasers meet in the league at the Etihad Stadium.

Either side of that crucial Premier League match is a two-legged Champions League quarter-final tie against Benfica, with arch-rivals Manchester United and Merseyside neighbours Everton to follow immediately after the trip to Wembley.

Starting immediately after the international break, Watford kick-off a run of seven matches in 23 days as the reality of still being involved in three competitions – having already played six matches to win the Carabao Cup – starts to bite.

Van Dijk, however, is relishing the prospect.

“I think one of the first things you don’t have to forget is; enjoy it,” he told LiverpoolFC.com.

“Like [against Forest], it’s something you should enjoy, these nights where you have to fight for everything. So that’s what we have to do in April as well.

“But I think everyone, not even the younger guys, everyone should enjoy it.

“It’s tough sometimes because you want to play as well as you can and even when there were moments where we were a bit sloppy on the ball, [we] still kept going and kept pressing.

“These moments always happen and you just have to give it your all, enjoy the moment and focus on the game ahead of us.

“It’s good we are going to Wembley again.” 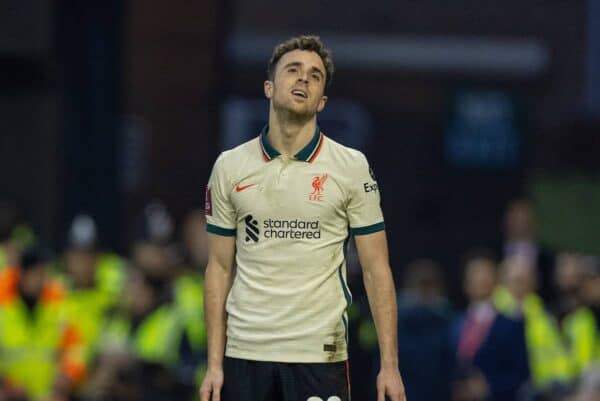 Victory at the City Ground came courtesy of Diogo Jota’s 19th goal of the season.

The Portugal international has now scored in back-to-back games after seven appearances without a goal, having missed 10 days in February with an ankle injury.

“What a player. This goal was exceptional. It was massive,” said manager Jurgen Klopp.

“It just shows, after his injury he needed a little bit to get back on track and I hope he is really coming back healthy from the international break because he looks like he is better.”

Jota’s intervention was crucial as Liverpool were missing Mohamed Salah, who has a minor foot injury, while Klopp chose to rest Sadio Mane in another example of his good man-management.

Salah’s Egypt face Mane’s Africa Cup of Nations champions Senegal in a World Cup qualifying play-off during the international break and Klopp wanted to give both the chance to be in the best condition they could be ahead of the two-legged tie.

“Mo felt his foot again from the Brighton game. It wasn’t a massive problem but it was clear that he would not play in a game like this,” said the Reds boss.

“At that moment it was clear that we would not use Sadio in the game either because the game is too big in Africa and I would not be the one to be doing things like this that could be misunderstood.”