Liverpool kept their title hopes alive as they returned the serve to Man City, but Fabinho‘s hamstring injury could complicate the weeks ahead…

Three points gained at Villa Park and Liverpool have handed Man City the Premier League dancefloor, to see if Pep Guardiola and his players can overcome their brooding paranoia and all but close out the title race during their next two fixtures.

In part, this will not have been budgeted for; in the wake of Saturday’s draw with Tottenham, Sky Sports’ footballing scriptwriters will have earmarked Liverpool’s trip to take on Aston Villa as Jurgen Klopp’s version of Selhurst Park 2013/14, except on acid.

A game with an ensemble cast of unlikely Villans, the home team was one which was dripping in Anfield folklore.

What better plot for Sky than Liverpool’s lingering realistic title hopes being dashed by a collection of their own?

Even better, if the team in ecru can concede an early goal, especially one when there is an offside in the buildup – then that would be perfect.

Steven Gerrard, Gary McAllister, Michael Beale, Philippe Coutinho and Danny Ings, all dressed in claret and blue, employed to take a hatchet to an entity they love, all charged with the task of stopping Liverpool win a prize that was beyond them in their days at Anfield.

Friends with malice in mind, as a kitchen sink drama this was a scriptwriter’s dream. Bags of potential.

Lights, camera…action. Contentious drama, pathos and pain, before the brave fallen idols try to gather themselves at Wembley a few days later, then aim for the ultimate glory in Paris two weeks beyond that.

A story of devastation and redemption, this represented potential Oscar-winning sports cinematography.

A swift equaliser from Joel Matip and a magnificently worked second-half winner from Sadio Mane, via the brilliance of Thiago and Luis Diaz, and the script had been ripped up. 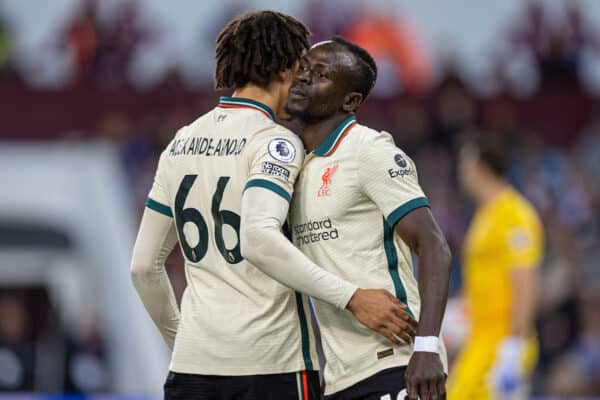 Football as tennis, this was Liverpool planting the ball back into the Man City court, in one of the greatest trials of nine-month endurance ever when it comes to the inflatable size-five orb.

Two opponents counter-punching from the baseline for hours on end, until the final point has been won and everyone’s toenails have fallen off.

While we set our sights on Wembley and the FA Cup final, before we kick another ball in Premier League anger at St Mary’s against Southampton, Guardiola’s side will head to Molineux and the London Stadium to take on Wolves and West Ham respectively – two fixtures that come within the space of four days.

Victories of a similar velocity by which City swept Newcastle aside on Sunday and – while we could still maintain a mathematical interest in title-chasing proceedings – the gig would genuinely be up.

In one respect, it is a hopeless situation to be in, but in another, we can relax to an extent. 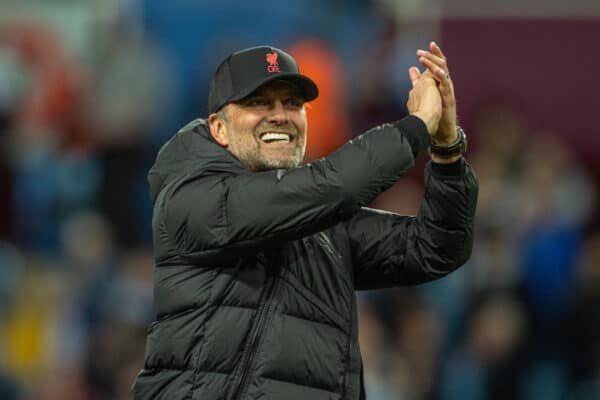 Premier League proceedings are completely out of our control, and if the defending champions take six points from their next two games, then at least Klopp will be able to play the percentages in his team selection down on the south coast and then once more a few days later at home to Wolves, in preparation for the Champions League final.

Of course, should Wolves and/or West Ham rise to the challenge across the days ahead, and in turn do us the most glorious of favours, then we’ll be headed into an iconic tie-break of Borg vs. McEnroe proportions.

Our biggest concern at Villa Park was obviously the injury to Fabinho; hamstring injuries aren’t usually shaken over the course of a few days, and with two-and-a-half weeks to Paris, if there are any serious doubts over his fitness then I’d rather he sat out the next three games in order for him to be fully primed for the final.

This is a Liverpool that is capable of looking after itself in the short term when it comes to the prospective absence of Fabinho – even in the FA Cup final.

Any vulnerability in his hamstring and our Brazilian midfield colossus should only be risked for attempting to win the Premier League and Champions League, and if by Sunday the former is looking impossible to win, then it leaves only Paris for him to concern himself with.

On Saturday, it will still be part two of a potential quadruple, but of the trophies left to win it is the lesser of the three – yet it will be no occasion to be circumspect about which players Klopp names in his starting lineup.

Fabinho aside, should the damage to his hamstring remain ambiguous, Klopp needs to go big at Wembley. 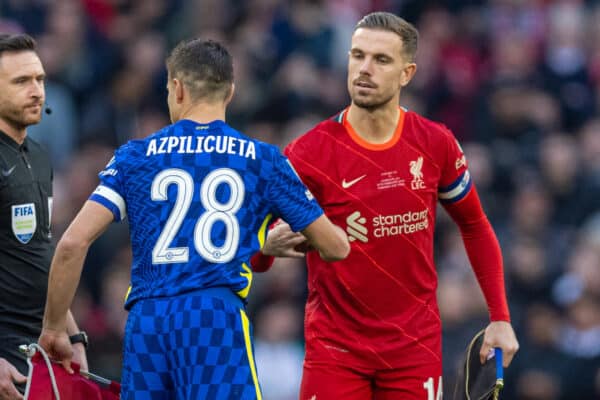 Because while Chelsea might have been playing possum of late, rest assured that they will magically find the levels of enthusiasm on Saturday that have seemed utterly beyond them in recent weeks, a reaction that will be fuelled by Thomas Tuchel’s inferiority complex when it comes to him residing within the shadow of his compatriot.

From the perspective of Chelsea’s players, there will also be a thirst to avenge their League Cup final defeat. The Reds are the Reds though, and no team should scare them.

See you at Wembley.