Jurgen Klopp provided an injury update on Thiago, the desire to “keep going” and looked ahead to the challenge that awaits in Paris against Real Madrid.

Here are three key things from the manager after the Premier League season came to a close for Liverpool:

“Not good” for Thiago

It was not a sight Reds wanted to see, Thiago looking forlorn as he made his way down the tunnel after picking up an injury in the first half.

He will need a scan and it’s now a serious race against time for the Champions League final on Saturday, a game Divock Origi will not be available for thanks to a minor muscle injury.

“Not good, but I cannot say more. He was outside with the families, had his little girl on his shoulder, so he could walk. That’s obviously a good sign. All the rest, we’ll see from tomorrow,” Klopp said.

“Yes, lower part of the body. I know it but I actually don’t want to talk now about it. We will see.

“Just give us a chance to…it makes the news not better or worse, we want to wait until we know more about it. Then you get the information as well.”

The desire only grows

After the rollercoaster of a day in the title race, it would evade Liverpool in the end, but while others have seen the curtain fall on their season, the Reds still have one game to go.

No. 7 is on the line and Klopp knows the sting of Saturday will only act as motivation in Paris.

“We have now five days to prepare for the final and that’s what we’ll do,” Klopp said.

“Then we will face an incredibly experienced team. But it’s OK. Of course, losing the league today increases the desire to put it right next week.” 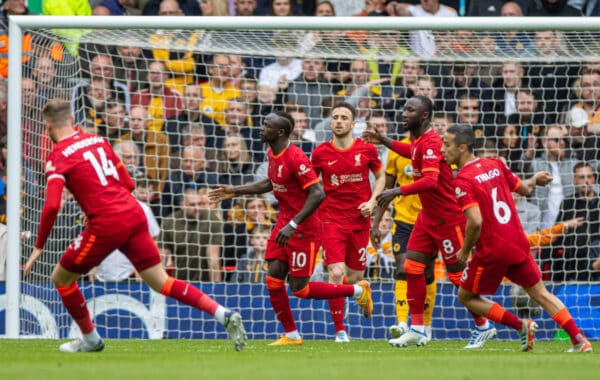 Liverpool’s game was dramatic enough, the events at the Etihad tipped it over the edge and Klopp will not have been alone in his preference for the events away from Anfield.

“With all the things, I would have preferred if they were 5-0 after 10 minutes and then you play the game and it’s fine,” he said.

“So it makes it of course more difficult. But the season was so close, so tight. Moments, decisions, these kinds of things, when you are one point apart.

“What I learned about life is if you stay on track, if you keep going, you’ll get a reward.

“Not today, the maximum reward, but we will get it. It’s about us to keep going and that’s what we will do.

“Congratulations to Man City, Pep Guardiola, all staff, all players, whole club, for being champions. We were close but, in the end, not close enough. That’s how it is.”