Andy Robertson has lauded “the best fans in the world” as Liverpool supporters lined the streets of Liverpool to give Jurgen Klopp‘s side an incredible reception for their remarkable season.

The left-back cut a forlorn figure after the Reds’ heartbreaking Champions League final defeat on Saturday but credited the Liverpool fans for lifting the spirits during an incredible parade.

With two domestic trophies in the bag, Liverpool had plenty to celebrate and it was a homecoming that was therapeutic for players and fans alike.

An endless stream of Reds greeted Klopp’s players at every turn of the parade and the show of support was not lost on Robertson or his teammates.

This is what he had to say to LFCTV, as he paid a brilliant tribute to supporters:

“To be honest with you, woke up this morning in a terrible mood – everyone did,” Robertson said.

“Obviously so disappointed with what happened last night, but then when you get on this bus you realise the best fans in the world come out.

“It’s lifted the spirits for all of us and it will give us a nice ending to a really tough season.

“Obviously, we move on to next season and this experience that we’ll get we’ll bring everything to it.

“Of course [worried about how parade may look]. You want to win the big final and when you don’t do that you worry about how you’ll be received, what will go on, how many people will show up.

“That was in the back of all our minds, but, my god, what a turnout.

“Like I said, best fans in the world. They gave us something to be happy about.

“To represent them, for all of us, is the biggest honour. 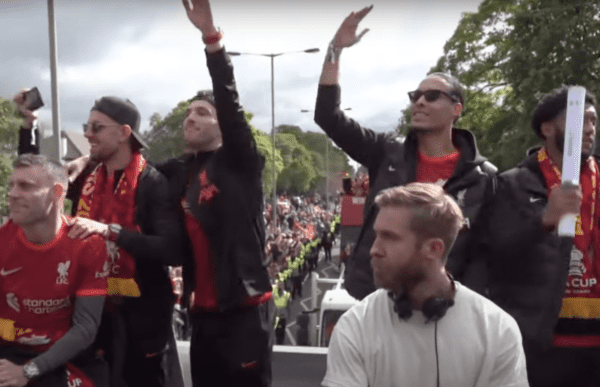 “We have to show our appreciation to them, it’s been a long, tough season for us but also for them in terms of how far they’ve travelled and how much money they’ve spent.

“63 games, home and away sold out – we can’t appreciate them more.

“It’s more just a thank you to them more than anything.”