US President Joe Biden departed for Uvalde on Sunday to console residents mourning 19 children and two teachers who were gunned down at an elementary school in a small Texas town.

Harrowing accounts are emerging of the ordeal faced by survivors of the Tuesday attack, as Biden calls for action to prevent future massacres in a country where efforts to tighten firearms regulations have repeatedly failed.

“We cannot outlaw tragedy, I know, but we can make America safer. We can finally do what we have to do to protect the lives of the people and of our children,” Biden said Saturday in a speech at the University of Delaware.

The president and first lady departed their Delaware home early Sunday and are due to visit the memorial outside Robb Elementary School on their arrival in Uvalde before attending a mass and then meeting with relatives of those caught in the shooting and first responders.

As residents gathered in a central square in Uvalde on Saturday to pay homage to the victims, haunting stories told by young students who played dead while a gunman killed their classmates and teachers were underscored by accounts of the slow reaction by police. 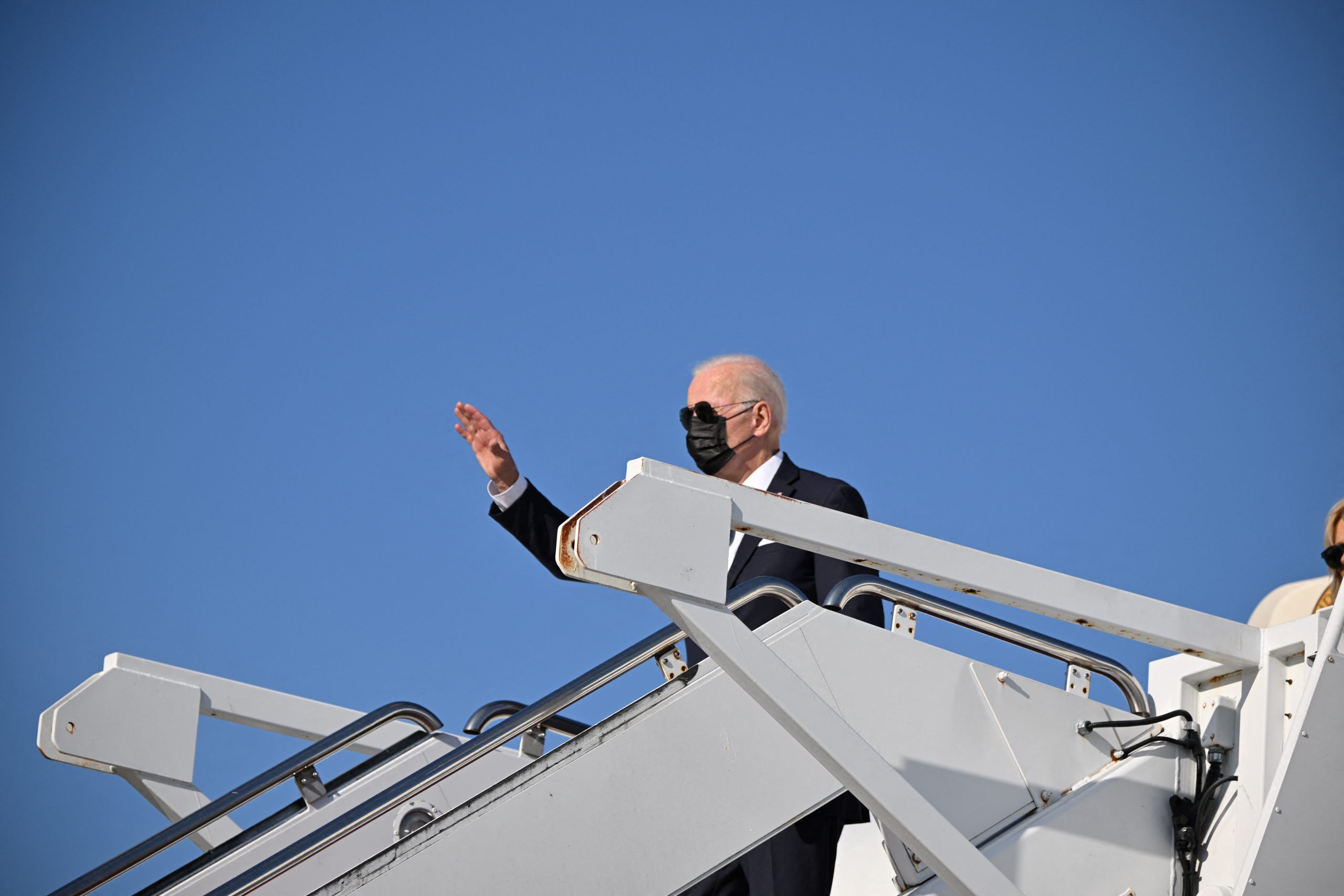 US President Joe Biden waves as he boards Air Force One before departing from New Castle Airport in New Castle, Delaware on May 29, 2022. – Biden is heading to Uvalde, Texas to pay his respects following a school shooting. (Photo by MANDEL NGAN / AFP)

Ten-year-old Samuel Salinas was sitting in his fourth-grade classroom when the shooter, later identified as Salvador Ramos, 18, barged in with a chilling announcement: “You’re all going to die.”

Texas authorities admitted Friday that as many as 19 police officers were in the school hallway for nearly an hour without breaching the room where the shooter was, thinking he had ended his killing. Officials called this delay the “wrong decision.”

Ramos was finally killed by police.

Survivors of the attack have described making desperate, whispered pleas for help in 911 phone calls during his assault. Some played dead to avoid drawing the shooter’s attention.

Eleven-year-old Miah Cerrillo even smeared the blood of a dead friend on herself as she feigned death.

– ‘Don’t move‘ –
Salinas said he thinks Ramos fired at him, but the bullet struck a chair, sending shrapnel into the boy’s leg. “I played dead so he wouldn’t shoot me,” he said.

Another student, Daniel, whose mother would not provide his last name, said he saw Ramos fire through the glass in the classroom door, striking his teacher.

The bullets were “hot,” he told The Washington Post, and when another bullet ricocheted and struck a fellow student in the nose, he said he could hear the sickening sound it made.

Though his teacher lay on the floor bleeding, she repeatedly told the students, “‘Stay calm. Stay where you are. Don’t move,’” Daniel recalled.

He was finally rescued by police who broke the windows of his classroom. Since then, he has had recurrent nightmares.

By mid-morning Saturday, several dozen people had gathered at Uvalde’s courthouse square, which has become a somber place of homage to victims and survivors.

Twenty-one simple white crosses have been erected around a fountain — one for each victim.

People have left growing piles of stuffed animals and flowers, as well as heart-rending messages: “Love you” and “You will be missed.”

Vice President Kamala Harris on Saturday attended the funeral of a victim of another recent mass shooting — Ruth Whitfield, who was among 10 people killed when a self-described white supremacist opened fire in a supermarket in Buffalo, New York on May 14.

“We will not let those people who are motivated by hate to separate us or make us feel fear,” Harris said at the funeral for the 86-year-old.

– ‘Have the courage’ –
She also urged US lawmakers to take action on guns.

“Congress must have the courage to stand up, once and for all, to the gun lobby and pass reasonable gun safety laws,” Harris tweeted.

The Uvalde shooting was the deadliest school attack since 20 children and six staff were killed at Sandy Hook Elementary School in Newtown, Connecticut in 2012.

Steven McCraw, director of the Texas Department of Public Safety, revealed on Friday a series of emergency calls — including by a child begging for police help — that was made from two adjoining classrooms where the gunman was barricaded.

But, explaining the delayed reaction by law enforcement, he said the on-scene commander believed at the time that Ramos was in there with no survivors after his initial assault.

McCraw separately told reporters, however, that a 911 call from a child received at 12:16 pm reported eight or nine children still alive.

As many as 19 officers were outside the classroom door at that time, according to McCraw’s timeline.

McCraw said the child, who dialed 911 multiple times — begged for police to come. Her final call was cut off as she made it outside.

US congressional delegation arrives in Taiwan