Ibrahima Konate enjoyed a stellar debut season for Liverpool, but noted a discrepancy between his running statistics and Virgil van Dijk‘s that showed he needs to “improve my positioning.”

The 23-year-old had to bide his time at the start of the campaign but quickly found his footing and challenged Joel Matip for the role of Virgil van Dijk‘s partner.

Konate would amass 29 appearances and finished the campaign with an impressive performance in the Champions League final, offering plenty of promise for what is still to come.

And his rise was noted by Didier Deschamps as he called up Konate to the France squad for the first time following an injury to Raphael Varane.

It marked another notable achievement for the young defender after a campaign that held plenty of learning curves, with Van Dijk one to notably provide advice throughout, through words and his actions.

“We also played a very high line at Leipzig. I’ve learnt a lot of things at Liverpool,” Konate told reporters in a press conference, as quoted by Get Football News France.

“Just by looking at Van Dijk’s game, I saw that he ran less than me during games and I couldn’t understand why. I need to improve my positioning.

“I don’t know if I would have had the same career in France, but going abroad has been successful for me. Germany has a lot of rigour. You have to adapt to a lot of things when you leave France. My family helped me.

“Not just Van Dijk [has had an influence], but rather all of the players like [Joe] Gomez and [Joel] Matip. These are experienced players who have helped me.

“Van Dijk is the best centre-back in the world and he gives me a lot of advice. Every Liverpool player has helped me, in every position like Sadio Mane and Fabinho. 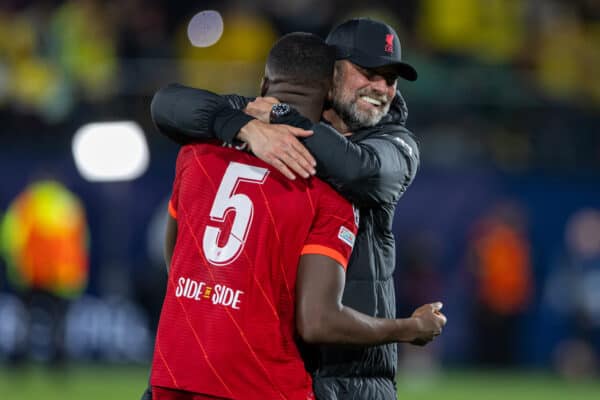 “It’s only the start and I hope to learn a lot of things and progress. In terms of my qualities, I think I’m fast, and that I am intelligent in spite of my physical qualities.

“Finally, I’m not afraid to have the ball at my feet.”

It’s not that common to hear players speak so honestly about a previous shortcoming or the need to improve in certain areas of their game, but Konate showed no such shyness with French reporters.

In Van Dijk, he has a world-class role model to look to and it’s that calmness, body positioning and awareness that ensures any movement is not a wasted one, and Konate can look to emulate just that.

Chelsea would be mad to not want Ronaldo claims grumpy pundit...