In a letter to the National Chairman of the party, Ezenwafor did his decision was based on personal reasons. 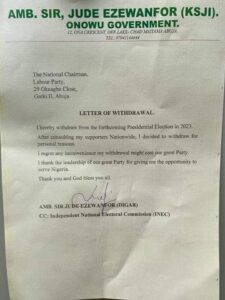 He thanked the party for giving him the opportunity to serve Nigeria.

Ezenwafor’s resignation came at a time the Movement for the Actualisation of the Sovereign State of Biafra (MASSOB) threatened to deal with troublemakers in Igboland.

The group had, in a statement signed by its National Director of Information, Comrade Edeson Samuel, condemned what it termed the “sponsored hypocritical move of one Mr Jude Ezenwafo who claimed to be a factional presidential candidate of Labour Party.”

The group had said Ezenwafor “was paid and allowed himself to be used by Aso Rock cabals to create artificial impression that Mr Peter Obi”s Labour Party is factionalised.

“MASSOB is addvicing Mr Ezenwafor to withdraw from this shameful and sacrilegious acts and mission he embarked on. We knew that APC and PDP are afraid of Mr. Peter Obi and his labour movement, that is why they want to use Ezenwafo as a tool to frustrate Mr. Peter Obi, because they know that Obi has won the heart of the youths, women and good conscienced citizens.

“Mr. Peter Obi will definitely win the presidential election in 2023.

“This Ezenwafo must learn from his paymasters on stepping down for their kinsman whom they entrust their political interest.

“The governor of Sokoto state, Alhaji Tambuwal stepped down for his brother Atiku Abubakar for him to win the PDP presidential ticket.

MASSOB advised Mr. Ezenwafor to use his tongue and count his teeth because MASSOB and Ndigbo will treat him as a saboteur and betrayer of Igbo nation.

Tge group’statement continued, “MASSOB reminds all the PDP and APC delegates from south east that went to Abuja, collected money and betrayed their brothers. your names are in our list, what happened to Judas Iscariot in the bible will happen to you because the money you collected to betray your land is cursed and the curses remains with you.

“MASSOB congratulate the former governor of Abia state, Mr. Ogbonnaya Onu, for his eloquence and gallant speech in defending the right of South East.

“Ndigbo are proud of you, even at the den of our enemies Ogbonnaya Onu was not intimidated by their numbers or their alliance with other regions.”

ABOUT US
Get live updates on everything you need to know about Politics, Entertainment, Gossip, Music, Sports, and More. We got you covered across the globe 🌍
Contact us: 24hrs[email protected]
FOLLOW US
© 24hrsreport.com Team - Designed by SMD
MORE STORIES