The last may not have been heard of the ongoing alleged land grabbing by a Lagos based Ogun monarch, Oba of Osobia Makun-Omi, Ijebu Water-Side Local Council Development Area, Oba Kazeem Salami, in Eti-Osa local government area of Lagos State following an alleged physical attack by the monarch on Mr Stanley Oripelaye, the owner of the land.

The 4.872 hectares of land has been a bone of contention between Oba Kazeem Salami popularly known as ‘All Rounder’ and Mr Oripelaye of Cosmopolitan Properties Limited. It has also resulted into litigation as Oripelaye has sued the monarch before a Lagos Magistrate Court, Igbosere, for trespassing on the land and selling some portion of it to unsuspecting public. 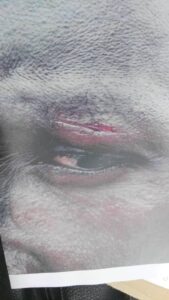 The Lagos State government, through the Task Force on land grabbing, and the police had also waded into the matter, investigated it and confirmed Mr Stanley Oripelaye as the authentic owner of the land in dispute.

The government report of the investigation of the land had also warned the monarch to stay off the land and directed the police to provide protection for Oripelaye.

While the matter is presently in court, Oripelaye, on Thursday told Nigerian Xpress Newspaper the monarch allegedly attacked him on Wednesday , June 8, 2022 through his thugs, and further warned him to stay off the land.

Narrating the incident, Oripelaye alleged his latest ordeal happened while on his way to meet up with an appointment at Ajah area of the state.

“I got a call from the staff Testing department in Lagos that I should come and collect a document he had earlier sent to me on Whatsapp. I was on my way to meet up with the appointment. When I got to the Lagos Business School, I crossed to the other side to.meet up with the staff. Suddenly, I saw one of Oba Kazeem’ thugs known as Saheed taking my pictures. Immediately.i called one of the police officers at Ogombo Police Station who knew about the land issue between me and Oba Kazeem and he told me to be careful so that the thugs will not attack me again,”Oripelaye said .

Oripelaye said the police officer advised him to report the incident at the Ogombo Police Station which he did immediately after he left the scene.

” As I was leaving the police station, I got a call from workers at a business venture I was supervising for the owner. They told me “All Rounder” boys came to carry their tools. I rushed to the place and they told me that was the third time the thugs would be coming to take their tools, and that each time they took them, they(staff) always had to buy new ones. As they were telling me, the same thugs came back and started taking my pictures and recording me on video.

In less than two minutes, Kazeem himself came with his police escort. I called the police at Ogombo Police Station to inform them Kazeem and his boys were at my place to attack me. When he saw me talking to the police, he ordered his boys to drag me out, collected my phone and started beating me. He said I am calling him a land grabber. He said he will.just tell the police to shoot me and nothing will happen. They beat me mercilessly. He later left with my phone and N3millon in my bag which I wanted to use to buy materials,” he further alleged.

The victim further said he reported the incident to the Divisional Police Officer, DPO at Ogombo Police Station who mandated one of the officers to handle the matter. He said the police called the monarch and he admitted he beat the victim but denied collecting his phone and money.

Oripelaye said the police subsequently wrote an invitation letter to the monarch to appear before it for questioning.

Efforts to speak with the monarch for his reaction did not yield results as he has refused to respond to messages sent to him.