A former Governor of Ekiti State and leader of the People’s Democratic Party (PDP) in the state, Mr. Ayodele Fayose, has charged the Ewi-in-Council to support the party’s candidate in June 18 governorship election, Otunba Bisi Kolawole, saying “beyond the transformation experienced during his two terms, infrastructural development in the state capital will be taken to a higher pedestal.”

Mr. Fayose made the plea, on Thursday, when he led the Bisi Kolawole Campaign Organisation on a campaign visit to the ancient palace. 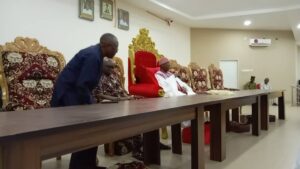 Mr. Fayose took time to chronicle his administration’s landmark achievements in the state capital, including the dualised Fajuyi Road, Construction of Fajuyi Park, construction of an Ultra Modern High Court, the King’s Market, Fayose Market, Fayose Estate, State of the Art governor’s office and the a flyover amongst others.

The former governor who recalled how the palace turned against him when there was a misunderstanding between his government and the palace during his first term asked that the Ewi-in-Council give him maximum support now that he has become the city’s number one development advocate.

“I promoted Ado Ekiti and sold Udiroko festival to the world. The present Fayose Market premises used to be a slum before I took over as governor in 2003, but today it has become a hub of economic activities. Just yesterday, executives of the market contributed N500,000 to support my party’s candidate. That gesture moved me to tears.

“My government built the Adunni Olayinka Women Development Centre in honor of the memory of a great Ado Ekiti woman. My administration held this palace and Ado Ekiti in high esteem.

“Away from all we did, Kabiyesi, I plead with you to give us your utmost support in this coming election so that other politicians would learn.

“Kabiyesi, if you refuse to support us, politicians will dare to take Ado for granted, they will say giving Ado a special status in Ekiti does not matter. They will say, with all that Fayose did to transform Ado, what did his party get in return? I beg of you, do not allow our enemies mock us,” Fayose said.

Assuring the palace that Kolawole will perform better than himself when voted in as governor, Fayose described the PDP candidate as a thorough bred son of the soil who will not disappoint.

He said; “the Kolawole dynasty in Efon Alaaye is reputed for dignity, decency, honour and integrity, I can vouch for him. Alaaye of Efon is your ally, Bisi Kolawole is not the type that will denigrate your throne.

Responding on behalf of the Ewi-in-Council, High Chief Francis Abe Adebayo, the Ejigbo of Ado Ekiti thanked Mr. Fayose  for the special recognition given Ado Ekiti during his reign as governor with the  assurance that the council will reciprocate his commendable gesture when the time comes.

“The Ewi-in-Council knows the value and premium you placed on Ado Ekiti, your good works dot every nook and cranny of this land and it is our prayer that God crown your efforts politically and otherwise, now and always,” the High Chief said.

The Ewi of Ado Ekiti, Oba Adeyemo Adejugbe thanked former governor Ayodele Fayose for standing by Ado and protecting the interest of the common man at all times. Oba Adejugbe proceeded to shower prayers on Otunba Bisi Kolawole and his entourage.