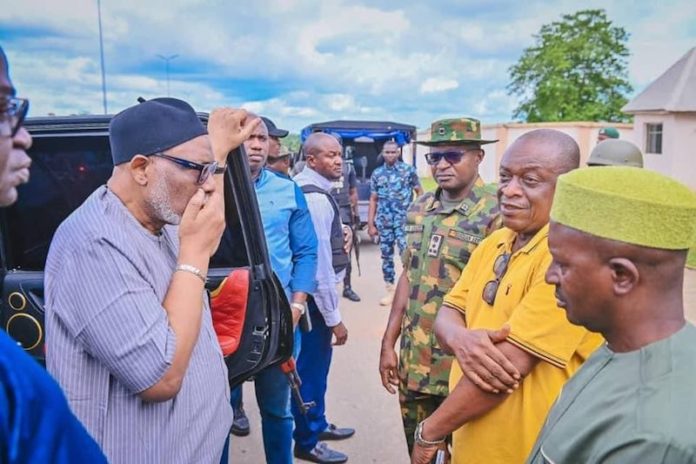 The United States of America (USA) has condoled the Governor of Ondo State, Mr Oluwarotimi Akeredolu over last Sunday’s terror attack at St. Francis Xavier Catholic Church, Owo, Ondo State.
A total of 40 persons out of the 127 involved in the attack were killed, leaving 61 survivors currently on admission in different hospitals and 26 already discharged.

In a letter to governor Akeredolu, dated June 7, 2022 and signed by the United States Ambassador to Nigeria, Mary Beth Leonard, the USA extended its heartfelt condolences to the people of the state and Owo community.
The USA condemned the attack in strongest terms, while expressing its concern over the growing pattern of violence that afflicts communities across Nigeria.

The letter, quoted by the Chief Press Secretary to the governor, Richard Olatunde read: “On behalf of the United States and the staff of the U.S. Mission in Nigeria, I would like to extend my deepest condolences to you, Ondo State, and the Owo community for the horrific event and lives lost at the St. Francis Catholic Church on Sunday, June 5.

“This tragedy saddens us deeply and our thoughts and prayers go out to the victims and their families during this difficult time. The United States condemns this attack in the strongest terms, and we are concerned with the growing pattern of violence that afflicts communities across Nigeria.

“We remain steadfast in our efforts to support Nigeria in enhancing civilian security throughout the country. Once again, please accept our deepest condolences,” the letter added.

Meanwhile, the Governing Council of the National Human Rights Commission (NHRC) has condemned in its entirety the spate of killings and total disregard to the sanctity of human lives being perpetrated by various criminals within the country.

A statement yesterday by the Commission noted that Sections 33 and 34 of the constitution of the Federal Republic of Nigeria 1999 as amended talks about the protection of lives and dignity of citizens of Nigeria subject only to the exceptions therein stated.

The Governing Council of the Commission however lamented that heinous crimes and killings were being perpetrated with impunity as exemplified in the recent Kaduna train attack; the attack at St. Xavier Francis Catholic Church, Owo; the killing of a young man Ahmed Usman at the Lugbe axis of the Federal Capital Territory for alleged blasphemy; the stoning to death of Deborah, a student of the Shehu Shagari College of Education, Sokoto also on grounds of alleged blasphemy; the killing of a pregnant woman Fatima (Harira) and her four children, and various others across the country.

The Council condoled with the families who had lost their loved ones in the attacks and pray that God Almighty would grant them the fortitude to bear these irreparable losses.

The statement added: “NHRC wishes to use this opportunity to call on the Federal Government of Nigeria to intensify efforts towards apprehending these criminals and bringing them to justice as well as improving the security situation in the country.

“The NHRC also implores every Nigerian to take necessary steps to contribute to the peace and security of the nation by providing information to security personnel and preaching the essence of tolerance and peaceful co-existence among other measures,” adding that, “The NHRC remains fully committed to playing its role in the promotion, protection and enforcement of the human rights of the citizens of Nigeria as well as all resident therein.”