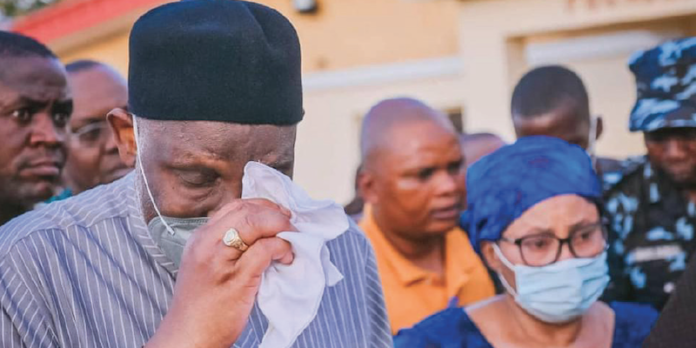 Unfortunately, gunmen, again struck in Sabo area of Ondo town, in Ondo West Local Government Area of the state and have killed six men.
But a Pan-Yoruba Socio-Cultural Group, Afenifere, has called on President Muhammadu Buhari, to fish out perpetrators of last Sunday’s terror attack at St. Francis Catholic Church.

Briefing newsmen on Thursday at the end of the National Security Council meeting presided over by President Muhammadu Buhari at the State House, Abuja,  Minister of Interior, Ogbeni Rauf Aregbesola, said security agencies had been directed to go after the perpetrators of the act and bring them to justice.

According to him, the motive of the terror group was believed to be pitting Nigerians against each other and making it appear as ethno-religious war.

While noting that the ISWAP’s imprints had been determined in the attack, he said arrests were yet to be made, and that, there was no ethnic agenda, urging Nigerians to unite and defeat the terrorists.

His words: “The National Security Council, has just risen from its meeting today, which reviewed, very critically, all aspects of security situation in the country and came up with conclusions, commending the efforts of the military and other security agencies in mitigating the insurgency, particularly, in the Northeast, where the fundamentalists there have been weakened, degraded and equally in the Northwest, where the bandits are equally weakened, and the Northcentral, where we’re engaged with pockets of bandits.

“The council is quite concerned about the violent attack in Owo, Ondo State, and has been able to locate the perpetrators of that horrendous attack. From all indications, we are zeroing in on ISWAP, the Islamic State for West Africa.

“It is not an ethnoreligious thing, the animals in ISWAP wanting attention, recognition, are suspected to have launched that attack. We have directed all the agencies concerned to go after them and bring them to justice”.
Aregbesola said the Council was also concerned about killings in the name of blasphemy and has directed the security agencies to go after perpetrators of two incidents that occurred in Sokoto State and Abuja recently.

“We are equally concerned about the spate of attacks in the name of blasphemy. The police have been directed to mobilise, identify and preempt all those involved in the blasphemy attacks in two areas of the country, namely Sokoto and Abuja, of recent. The assurance is that we are committed to maintaining law and order and providing adequate security for Nigerian citizens.”

Meanwhile, THISDAY has learnt that the attack on the Sabo area of Ondo town, in Ondo West Local Government Area of the state, happened in the wee hours of Wednesday.

THISDAY also learnt that the victims had been buried since Wednesday while one of the victims, who survived the attack was still receiving treatment at an undisclosed hospital in the state.
Eyewitness said the gunmen stormed the area on motorbikes around 12:30am and opened fire on innocent roadside petty traders.

He said, “They came to our area (Sabo) on motorbikes and each was carrying three gunmen. All of a sudden, they started shooting people, who were mostly Suya and tea vendors. A J5 bus driver, who was on transit and stopped to eat was the first victim. They killed a guardsman and another shopkeeper, who was trying to lock up his shop and run away from the assailants.

“They again gunned down two young men, who were eating noodles at a Mai Shayi store. That makes five victims in Sabo alone. Again, they struck another area called Iba, where they also shot dead another man,’’ he added.

Police Public Relations Officer in the state, Funmilayo Odunlami, confirmed the development but said it was an armed robbery case, not a reprisal attack, stressing that the victims involved in the failed robbery were from Yoruba, Igbo and Northern extraction.

“The Command wishes to state clearly that there was no reprisal attack on the Hausa Community at Sabo area in Ondo town or any part of the state  as purported by war mongers.

“On Tuesday, 7th of June, 2022, there was an attempted robbery on a J5  vehicle with plate no MKA – 469 YJ carrying Onions and Potatoes coming from Zaria enroute Ore,  had a stop over at Ondo town and was attacked by men of the underworld around 0110hrs .

“In the cause of this attempt,  the robbers shot the driver, while the motorboy escaped with  bullet injury, a motorcyclist alongside the pillion and a passerby were also hit by stray bullets,” noting that investigation had since commenced and effort was ongoing  to arrest the assailants.

“The Commissioner of Police, Ondo State Command, Oyeyemi Oyediran, urged the people of the state to remain calm and disregard the fake news,  as the rumour mongers are out to stir unnecessary chaos and disrupt the peace of the state. This is also to warn the peddlers of this fake news to desist as the Command will not fold its arms and let them shatter the peace being enjoyed in the state,” the PPRO added.

It was against these developments that Afenifere, yesterday, paid a condolence visit to Ondo State Governor, Mr Oluwarotimi Akeredolu (SAN), in Akure, the state capital.

Led by its national leader, Ayo Adebanjo, in company with other members, Adebanjo commiserated with the governor, the Olowo of Owo, the Catholic church and the poeple of the state over the ugly incident, even as he referred to the governor as a true son of Yoruba race, saying his courage in establishing Amotekun corps was typical of a true Yoruba man.

The Afenifere leader, particularly, commended Akeredolu for doing his best to secure not only the state but the South-West region, adding that the security situation in the Southwest could have been worse, but for the establishment of the Amotekun corps.

He saluted the courage and stance of the governor on issues of national importance, saying Akeredolu has always demonstrated that he was a politician with a second address.
The Afenifere leader insisted on the change of the constitution to give the country a people’s constitution and equal opportunity to all.

He said Nigerians were currently suffering under what he called “military imposed fraudulent constitution”.
The group, however, donated N1.5m to the church and victims of the attack.
Speaking, Akeredolu appreciated them for visiting and, noted that his administration would not back down on its Anti-open Grazing Law.

“We have been reading the news, and I think  this incident is the most internationalised incident in Nigeria ever. Today, the Pope is talking and tomorrow the House of Common is debating, everybody is talking. I have got calls from many people, I have gotten letter from the US Embassy and others. Everybody is worried, I’m worried myself.
“If we were at war, it was not possible for us to lose 40 people in a day, because we would all be armed and face each other. If you visit the hospitals, one will feel even worse. I have been to all the hospitals over and over, there is no way the visit will not bring tears to your eyes,” the governor added.

US congressional delegation arrives in Taiwan