Liverpool’s pursuit of Benfica’s Darwin Nunez is in its final stages, with the final breakdown of the deal seemingly all that is left to agree on before it can become official.

The 22-year-old has dominated discussions among Reds in recent days and weeks after Liverpool’s interest swiftly stepped up a gear with a deal now in sight.

The Uruguayan represents what many believe is the next stage of evolution for Jurgen Klopp‘s side, with Nunez not the typical profile that the Reds have sought after in recent years.

And a deal looks to now be only a matter of time, but what exactly do we know at this stage?

What is the latest?

It’s been fast-moving for Liverpool, with the deal now clearly a matter of when not if.

Differing reports have emerged from various sources, with some suggesting it is all done and others still reporting that final agreements have yet to be struck between Liverpool and Benfica.

But just what is the current state of play?

And this is where Liverpool are currently at, so it appears, with finding middle ground the key for both.

The reliable Times Paul Joyce reported late on Saturday that the Reds are aiming for an up-front figure close to £60m, while Benfica are holding out for £68m, plus add-ons.

But the sense is that once the package is agreed, the dominos will fall quickly for Liverpool and Nunez to make it official, perhaps early this coming week if all goes to plan.

What can we expect from Nunez? 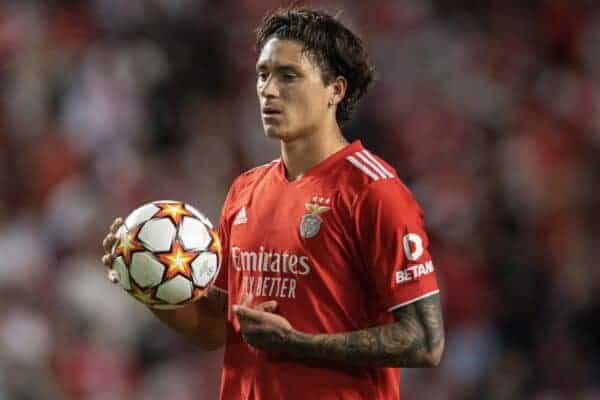 Liverpool fans got a glimpse of Nunez from the two Champions League fixtures earlier this year, scoring two goals to leave an impression.

Jurgen Klopp was complimentary of the 22-year-old before the second meeting of the two sides, saying he is: “Physically strong, quick, plus calm around his finish, when he finished the goal off he was really calm.

“Good, really, really good. How we say in these situations, if he stays healthy it’s a big career ahead of him.”

But as for his profile, This Is Anfield can help you out with a bit of reading into a player who looks soon to settle into the Liverpool dressing room.

First, a lowdown on Nunez’s journey, his profile and what his arrival may mean for the Reds’ style of play: Nunez – Who is the forward with 34 goals in 41 games?

And second, an interesting insight into the young forward from Alfredo Fumacas of the Benfica Podcast, someone well placed to tell us all we want to know.

From his ‘never-quit attitude’ to his ‘perfect’ fit for the Reds’ pressing game, see all the answers to what Liverpool can expect from Nunez here!