The summer is upon us, for those of us in the northern hemisphere at least, and that means transfer window talk, new fixtures and pre-season, but just to name a few.

Liverpool’s season came to a close at the end of May after a remarkable run across four different competitions and 63 games, with two trophies added to the cabinet.

It could have been more but it leaves plenty of fire in the belly for next season, which is not that far away even if some players are still taking part in international fixtures!

All is to say that this period of the year leaves plenty of questions for Liverpool fans, and here are some of those queries.

When will we see Nunez in a LFC shirt?

The sense is very soon, as Darwin Nunez is expected to start his medical on Monday after Liverpool and Benfica found common ground for a £64 million deal that could rise to more than £85 million.

Are any other deals in the works?

On the incoming front, Aberdeen right-back Calvin Ramsay is expected to follow Nunez through the entry doors with a deal in the region of £4 million expected.

The 18-year-old has plenty of potential but his arrival as Trent Alexander-Arnold‘s deputy will see Neco Williams look for a permanent home, with both Fulham and Nottingham Forest interested.

Williams is one of a handful of players expected to leave this summer, the biggest of which is Sadio Mane after signalling his desire for a new adventure, but Bayern Munich must first make an acceptable offer.

Takumi Minamino is also attracting plenty of interest, Monaco the frontrunners, and Liverpool will not stand in his way, nor Alex Oxlade-Chamberlain and Nat Phillips – a contingent that could raise £100 million in sales.

As for further incomings, there’s been no strong word on other targets as of yet following Aurelien Tchouameni’s decision to join Real Madrid – but that certainly suggests a midfielder is on the wishlist.

It’s not far away until Liverpool discovers what the new season has in store, with fixtures to be released on, Thursday, June 16 at 9am (BST).

It comes just over seven weeks before the start of the new 2022/23 Premier League season, which is to kick off on the weekend of August 5/6/7.

When do international players end their season? 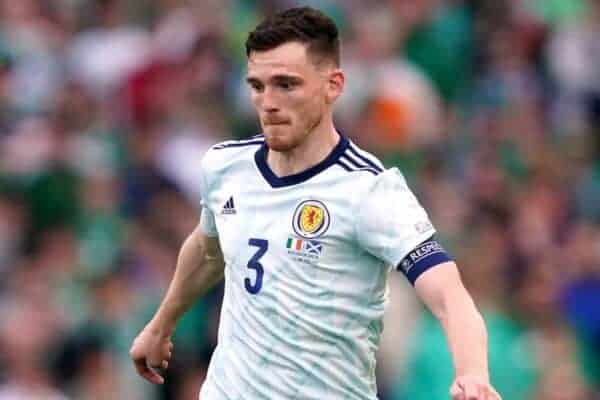 The absurdity of the footballing calendar was made abundantly clear once more this summer with a ridiculous number of Nations League games thrown into the schedule.

Friendly fixtures for others have also extended what was already an incredibly taxing season.

A total of 18 senior Liverpool players were called up for international duty, 10 concluded prior to June 11, but the rest will finish up on June 14, 304 days after the Reds’ season started at Norwich.

How far away is pre-season?

It feels like it will be here in the blink of an eye, with Klopp’s squad to reconvene on Monday, July 4 – just over five weeks after the Champions League final.

Liverpool will hope to have the majority of their squad ready for the first day, but a number of players may be handed extra time to rest and recover following international exploits.

But the likes of Joe Gomez, Joel Matip, Thiago, James Milner, Jordan Henderson, Roberto Firmino and Luis Diaz will be expected on the first day having not taken part in international duty.

And are any summer games confirmed?

Yes, so far three games before the Premier League season opener have been confirmed for Liverpool – although more are to come.

Firstly, a trip to the Far East will see the Reds meet Man United in Bangkok on July 12, before travelling to Singapore to face Crystal Palace on July 15.

The Community Shield is the next game already on the schedule, with Man City to meet Liverpool in the traditional curtain-raiser to the Premier League on July 30, at the King Power Stadium.

Wembley is not available for the fixture due to the Women’s European Championship.