This was contained in a statement signed by the Bishop of Enugu Diocese, Callistus VC Onaga. 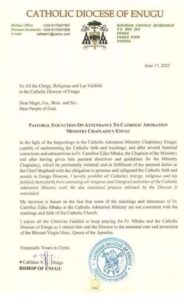 “I hereby prohibit all Catholics (clergy, religious and lay faithful ) henceforth from attending all religious and liturgical activities of the Catholic Adoration Ministry until due canonical process initiated by the diocese is concluded,” the statement said.

Fr. Mbaka’s latest spat with the Diocese may not be unconnected with his recently reported statement that Mr. Peter Obi, presidential candidate of the Labour Party in next year’s elections, will not win because he is stingy.

The statement has drawn wide condemnation across the country, especially on the social media.

The controversial priest has been in the eye of the storm for dabbling into politics, resulting in his suspension by the church authorities in May last year, as a result of his frequent clashes with the Presidency.

The church had considered such as overshadowing his priestly duties and inimical to its image.

Chelsea to sign €70m Nkunku next summer according to insider »...